I made this script for a freelancer project originally, which was a sailing game with pirates and ships. We needed a compass, and we wanted to show the player, how the wind affects his sailing speed.

The basic idea here is to have a horizontal grid layout with Text elements. I call this the ribbon. The script moves this ribbon horizontally based on where the character is facing.

The problem I encountered is circularity. I wanted to translate from the end of the ribbon to its start seamlessly. The setup below resulted in a failure, the compass ran out of letters.

I figured out I have to make duplicates. I only move the ribbon between the two S letter and let the overflowing part simulate the circularity.

The script is pretty simple. We need three variable for the inspector:

We also need a private variable to store the angle multiplier. I’ll explain it later but first, let’s see what this script does.

I’m using text game objects for the letters and for the separators (—). Each of these cells has the same width value, defined in the GridLayoutGroup.

Between North and North West there is 45 degrees difference in angle. If I’m staying in the center of the N letter, I have to move 2 cells:

That’s being said, every 45° needs to move the ribbon with 2 cell width. Instead of calculating each time in the update function, I precalculate this and store it on the _angleMultiplier variable.

Download the whole script with color handling and demo scene

How to use the component

The component you can download from the Gumroad (for free) has a slightly better inspector, and also contains the color changing feature. 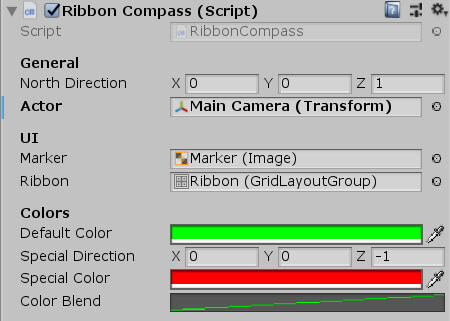